In Search of the Best Pizza

A friend of mine, who was raised in Connecticut, told me that Connecticut pizza is the best. She hasn’t been able to find pizza as good anywhere else. Challenge accepted! This week’s state dinner had me on a full-on education hunt, as I searched for just what it was that made Connecticut Neopolitan pizza so good.

It turns out, there are several factors. The first is that a Neopolitan pizza uses fermented dough for the crust. Peggy Paul Casella, on her blog Thursday Night Pizza directs to leave the dough out on the counter in an airtight container for 24 hours, and then refrigerate it for another day. Following those tips, we ended up with a bubbly, stretchy dough that was very workable for a pizza. I also watched countless videos on how to stretch the dough, and how to get your baking stone hot enough. I recommend Vito Iacopelli’s YouTube channel if you want to learn techniques for making great pizza at home! 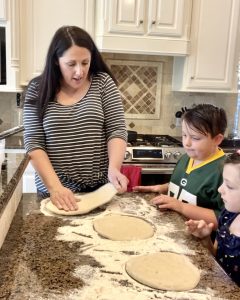 Seafood and Pizza: An Surprising Combination

Seafood has a long history in Connecticut. Native Americans harvested clams in Connecticut before it even became a state. Many fish markets and seafood shacks that opened in the early 1900s are still operating as family-run businesses today. What does seafood have to do with pizza? Frank Pepe, restauranteur and inventor of the New Haven-style thin crust pizza, was inspired by the raw clams that they served as an appetizer at his Frank Pepe Pizzeria Napoletana restaurant. He served pizza and he served clams, so why not put them together? Thus, the New Haven White Clam Pizza was born.

We were incredibly skeptical of the New Haven White Clam pizza. Clams, especially canned clams, did not sound very good for a pizza. Just to be safe, I made some more traditional pizzas, to go alongside the clam pizza. Surprisingly, the clam pizza was our favorite! I added a little too much oil, but the dough was thin and crispy, and the crust was airy. Garlic and fresh mozzarella dominated. I recommend you give it a try! 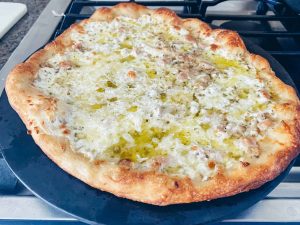 Many sources state that the Snickerdoodle is the state cookie for Connecticut, others claim it is the spice cookie. Being the Nutmeg State, I think the latter is probably more likely. But Snickerdoodles are so good I couldn’t resist taking this opportunity to make them. And I am glad I did! These cookies turned out incredible! I made them again a couple of times just to be sure I could replicate them, and I am excited to share that I have a pretty perfect cookie to share with you! Stop what you are doing and go make this cookie! You won’t regret it!