It is no surprise that fried catfish is one of the most famous foods in Arkansas. We cooked this up the traditional way by coating it in a cornmeal breading and frying it crisp. We implemented 2 secrets to make the catfish extra delicious. One was by soaking it in buttermilk while prepping the rest of the meal, which makes the fish super tender. The second is to let the cornmeal sit on the fish for about 5 minutes before dropping it into the oil. This helps the breading stay on the fish. Cora and Levi each ate about a half a strip of catfish. I’m taking that as a win! 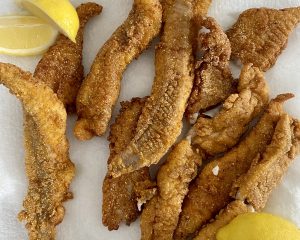 Arkansas is also the largest producer of rice in the US

There are over a million acres of rice farms in the state. It is such an important part of their state culture that they even have a “Miss Arkansas Rice” competition. In this competition contestants are judged on their rice knowledge and they also submit a rice dish to be judged. For our dinner, we selected the 2017 pageant winner’s creation, Parmesan Shrimp & Rice Casserole. In addition to Parmesan, shrimp & rice, this dish has okra and creole seasonings, so we thought it was the perfect addition to our dinner. When you make this dish, be sure to read the instructions more carefully than I did! I didn’t realize until I was putting the casserole into the oven that it called for cooked rice! I put dry rice in! After a moment of panic, I added 2 cups of water, gave the casserole a good stir, and cooked it for 40 minutes instead of the recommended 20 minutes. The rice still had a tiny crunch to it, but the overall flavor of the casserole was delicious! 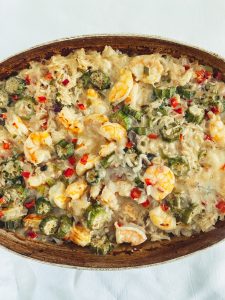 Rumor has it that a restaurant called “Little Mexico” invented the world’s first cheese dip all the way back in 1935. Now Texans will disagree with this origin, and I was a little bit skeptical adding this dish to our menu, due to the longstanding Arkansas-Texas cheese dip feud. Regardless of where it was invented we think melted spicy cheese is delicious, so we’ll let Arkansas claim the invention here, and enjoy the cheese dip on Arkansas night. 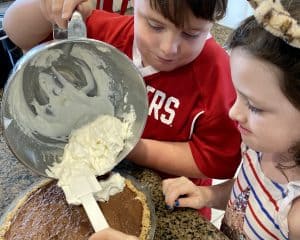 What exactly is Possum Pie?

We finished off the night with possum pie. Thankfully, there aren’t actually possums in this pie. It gets its name because it looks like one kind of pie on the outside, but once you cut into it you discover it is something different. Our take on possum pie included a pecan shortbread crust that tasted like a pecan sandie cookie. It’s a little bit crumbly, but that just meant I got to sneak some “cookie” crumbs while serving the pie. Yum! On top of the crust is a cream cheese layer with chocolate pudding on top of that. Many recipes call for instant pudding. I thought this special occasion was worth the time of cooking from scratch. Cora & Levi said it tasted like hot chocolate with marshmallows and asked me to make it again. 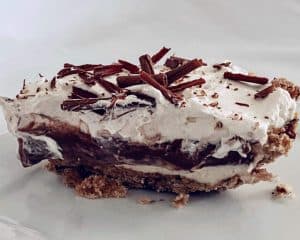