What Famous Food From California Should We Choose?

California has such a vast food culture, we spent quite a bit of time trying to decide our menu. Bay shrimp, California rolls, pho, avocado and bean sprout sandwiches. So many choices! We finally decided on fish tacos, with chips & guacamole. Just a few days before our California meal I shared the plan with Cora and Levi, and Levi pointed out that we have had a lot of fish for our state meals, and also a lot of fried food. He’s right! 3 of our last 4 state meals included fried food, and 2 of the 4 had fish. So we made a late in the game change to our plan and replaced the fish tacos with mission burritos. 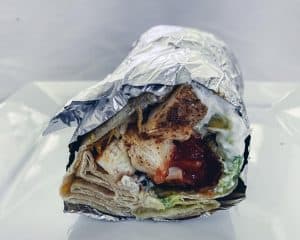 The Mission Burrito from San Francisco

Mission burritos were invented in the 1960’s in San Francisco’s Mission district. Where a traditional burrito has beans, meat and cheese, the mission burrito is known for being stuffed full of ingredients, including rice and salsa. In order to stick with the traditional massive size of these burritos, Matt took a trip to our local Chipotle and bought some tortillas from them. Levi’s eyes were the size of saucers (or shall I say, the size of a Mission burrito tortilla) when he realized that he was getting a burrito made with such a large tortilla! We filled our burritos with fajita chicken, cilantro-lime rice, cumin black beans, fresh pico, homemade guacamole, sour cream and cheddar cheese. They were monstrous and delicious! 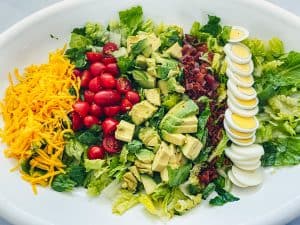 To accompany our burritos we made a big cobb salad, to give southern California representation in our dinner. The cobb salad is even older than mission burritos. Brown Derby owner, Bob Cobb, invented this salad at his Hollywood restaurant back in 1937. According to the Brown Derby, Mr. Cobb threw a bunch of refrigerator ingredients together to quell his hunger one late night, and the combination was so delicious that it immediately went on the menu! We left the chicken off because our cobb salad was a side. But we kept all of the important staples like hard boiled eggs, avocado and bacon. I made up a Dijon vinaigrette to top it off, and it really brought out the flavors well. (Note: This is an awesome dressing/salad if you are on a Keto diet. Just make sure your Dijon doesn’t have added sugar.) 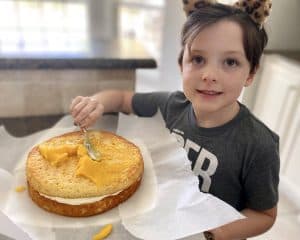 Possibly the most famous food from California is a whole category of fruit: Produce! When I visited a friend in California a number of years ago, I was amazed that she had citrus trees right in her yard! Here is a picture that I took on that trip. 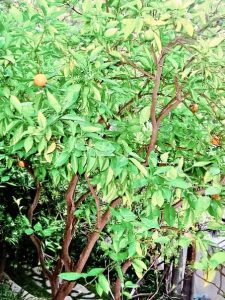 I loved that you could just walk outside and grab an orange to eat! Because of this memory, I knew that I wanted to have citrus for dessert and we decided on a 3-layer citrus cake, made with lemons and tangerines. The cake itself was a bit of a disaster. The 10-minute lemon curd had me stirring over a hot stove for over an hour! (Lesson: Make sure the bowl for your makeshift double-boiler is the right size and doesn’t let all of the heat escape around it.) But it was worth it! Tart lemon curd and sweet cream cheese frosting were a truly delicious combination! 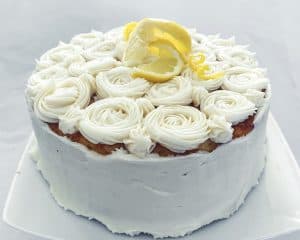