We started our search for famous food from Colorado with a virtual trip to Pueblo. Farmers in Pueblo have grown Mosco chile peppers since the 1800s, and eventual created the varietal called the Pueblo Popper chile. These chiles are slightly hotter than most jalapenos, and range from 5,000-20,000 on the Scoville.  Many use the Pueblo chile to make Colorado Pork Green Chile, though the further north you go the more likely you are to have chile made with Hatch. It’s quite the controversy – which is better, Pueblo or Hatch chiles? But many say that is like comparing apples and oranges. We don’t have pueblo chiles readily available here in Texas, so we used a combination of fresh Anaheim chile and canned Hatch chiles for our chili. 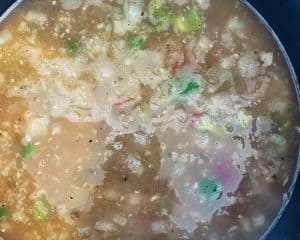 The Colorado Pork Green Chili could be a meal on its own! However, in Colorado you will most often see it as a sauce poured over enchiladas, burritos or even French fries! In Pueblo they use it for a dish they call The Pueblo Slopper, where green chili smothers a hamburger. Bison burgers are also popular in Colorado, so we chose bison burgers as the perfect base for our slopper. Then we poured a couple of ladles of green chile on top of the burger, and finished it off with shredded cheese, chopped onions, and a side of fries.

This burger looks a little lonely without all of its toppings. 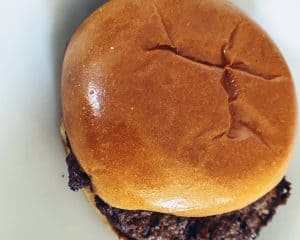 Many say that Colorado is the epicenter of craft beer in America. While craft beer has grown quite a bit in popularity, the very first craft brewery opened in Boulder, Colorado in 1979. Today there are more than 400 craft breweries in the state. We really tried to embrace this craft beer culture that Colorado is known for. I bought a case of Rupture, from Odell Brewing Company. I found it quite interesting that they are a fresh grind IPA, meaning that they grind the hops in house the morning that they begin the brewing process. What could be better than fresh ground? I’m sure it is a quality beer, but neither Matt nor I are usually fans of IPAs, so this was a bit wasted on us. We still have several cans in the fridge, so if you want to give this a try and live locally, let us know! 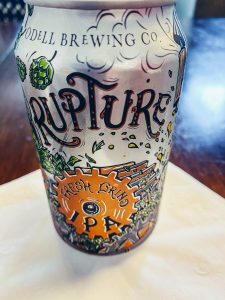 Five hours northwest of Pueblo, near the Utah border, is a town called Palisade. It was here that President Taft spoke at the first Peach Day Festival in 1909. Some of the nations best produce comes from Palisade, including the Palisade peach. We kept dessert simple this week. Peaches topped with healthy pat of butter and some cinnamon sugar. Then we baked them until they were soft and caramelized. And of course, we topped them with ice cream. Oh, so good! 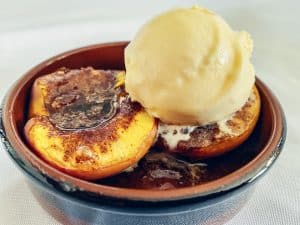