Florida: The land of beaches, and sun, and Disney World, and Cuban sandwiches, and key lime pie! Florida is well known as a tourist destination. But when we set off preparing for our Florida dinner I didn’t know much actual Florida history. Learning about the states across our nation has been a really wonderful byproduct of this project. In addition to tasting the delicious famous food from Florida, we also discovered some interesting facts. 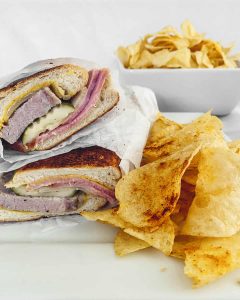 European explorer Juan Ponce de Leon discovered Florida in 1513. The discovery of Florida wasn’t his first time on American soil. He was a part of Christopher Columbus’s second expedition in 1493. A few years later he became the first governor of Puerto Rico. After a fight with Christopher Columbus’s son, Ponce de Leon once again set sail and led his first voyage landing on Florida’s east coast.

Fast forward 300 years to a time where Cubans were frequently traveling to Florida for employment and holiday. Immigrants began working in the southern Florida cigar factories and sugar mills. It is suspected that the Cuban sandwich, now one of Florida’s most famous foods, was a common lunch for these workers.

A New (And Some Say Better) Ham Sandwich

The Cuban sandwich is made by building thick layers of pork and ham, topping it with cheese, yellow mustard, and dill pickles, and cooking it on a hot press. It’s like an amped-up ham and cheese sandwich. Some shred their pork, but we roasted and sliced. The rest of the family disagrees (they hate pickles), but I think the pickles make the sandwich! 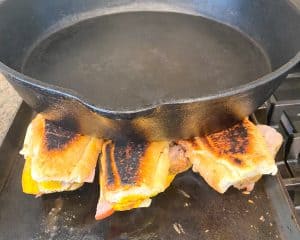 The Battle Over Florida’s Famous Dessert

We learned of another battle, as we researched the history of famous food from Florida. This time it was over the origin of key lime pie. Many say that the cook for William Curry, Florida’s first self-made millionaire, invented this pie. She is called “Aunt Sally.” But a cookbook author, Stella Park, claims that this pie was invented in New York as a marketing campaign for Bordon’s sweetened condensed milk. Regardless of who invented it, key lime pie is now known for being a Florida dessert. As a matter of fact, in 2006 it became the official state pie. 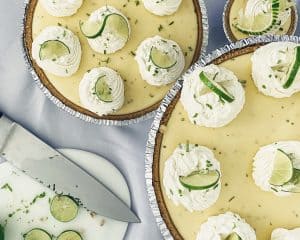