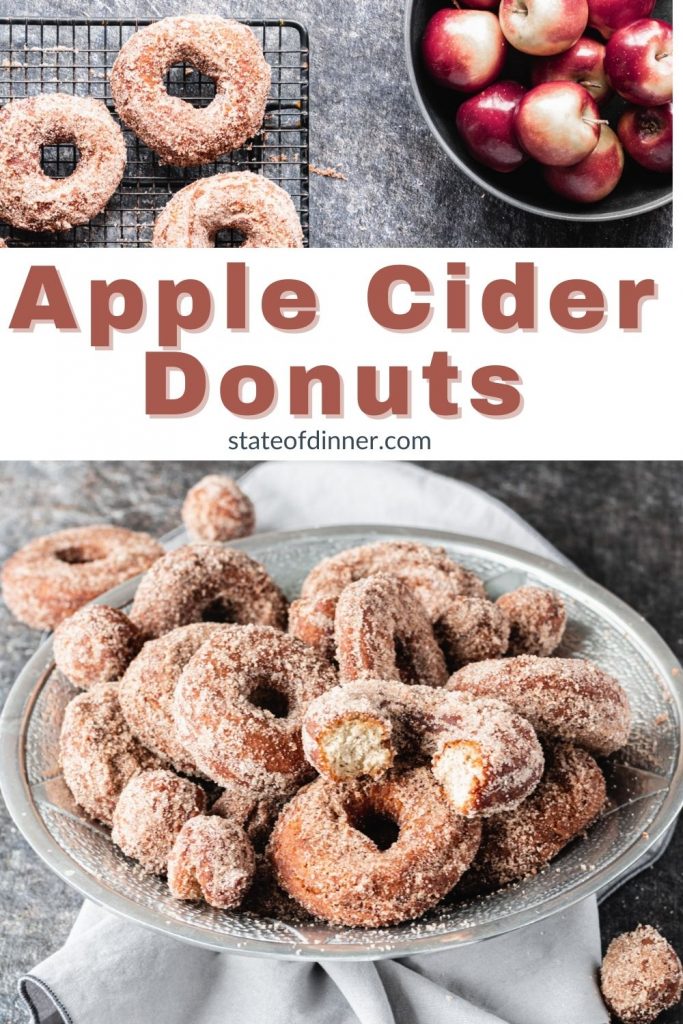 This old-fashioned apple cider donuts recipe gives you donuts with soft, tender apple cake on the inside, and a crispy cinnamon sugar crumb on the outside. With just one bite you will be welcomed into the comfort of fall.

In the northeastern part of the United States, apple cider donuts are a sign that fall has arrived. Many families make a tradition of apple picking at their local orchards, and they top the excursion off by devouring freshly baked apple cider donuts at the orchard's donut stand.

Make a fall breakfast spread by serving apple cider donuts, alongside pumpkin bread and buttermilk spice muffins. These recipes scream fall just about as much as a pumpkin spice latte!

Can I Use Apple Juice?

The best cider to purchase for these donuts is the fresh cider that can sometimes be found in the produce section of your local grocery store. It has a rich earthy flavor that makes these donuts incredible!

But it is spring in Texas, and my stores didn't have fresh cider. So I used apple juice and it still worked beautifully! Yep, contrary to what some websites say, you actually can use apple juice to make apple cider donuts.

The difference between apple cider and apple juice comes down to how it is processed. Apple cider is unfiltered, making it more earthy and tart, while juice has a cleaner, sweeter taste. Either one makes for a delicious donut.

What is critically important is that you get 100% juice/cider with no sugar added.

See the recipe card at the bottom of this post for the full list of ingredients, including measurements.

Buttermilk - The buttermilk makes these donuts soft and tender. If you do not have buttermilk on hand, simply add 1 tablespoon of white vinegar to regular milk, give it a stir, and let it sit for 5 minutes.

Spices - These donuts have the classic flavors of fall, with the combination of apples with cinnamon and nutmeg. They add warmth to the flavor of the donuts. If you love that apple and cinnamon combination then you will also want to check out my cinnamon rolls with apple pie filling recipe!

Can I make apple cider donuts in an air fryer?

Cook the donuts in the air fryer at 330°F for 8-10 minutes. They will be a little more biscuit-like on the exterior so I like to cover them in a cinnamon glaze instead of cinnamon sugar. Mix together 2 cups of confectioner's sugar, 1 teaspoon vanilla extract, 2-3 tablespoons of milk, and ½ teaspoon cinnamon to make the glaze.

Can I make the dough ahead of time?

Yes, the dough can be made ahead and refrigerated in a covered bowl or container for up to 24 hours before frying. You can even cut them in advance and place them on a parchment paper-lined sheet pan in the refrigerator if you desire.

How should Apple Cider Donuts be stored? 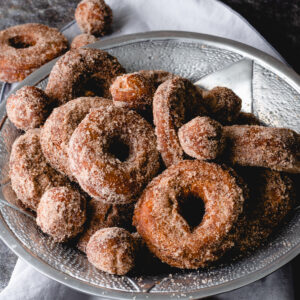 To Make the Donuts

Storage: Store donuts in an airtight container for 2-3 days. They can also be frozen for up to 3 months. Thaw frozen donuts at room temperature. Reheating: Leftover donuts can be warmed in the microwave for 30-60 seconds. Air Fryer: Make the donuts in the air fryer by cooking them at 330°F (166°C) for 8-10 minutes. Air fryer donuts will have more of a biscuit-like texture.   The nutritional value of fried foods on the site is based on an estimation of 10% oil absorption. Actual oil absorption will vary depending on temperature, time, and oil type.