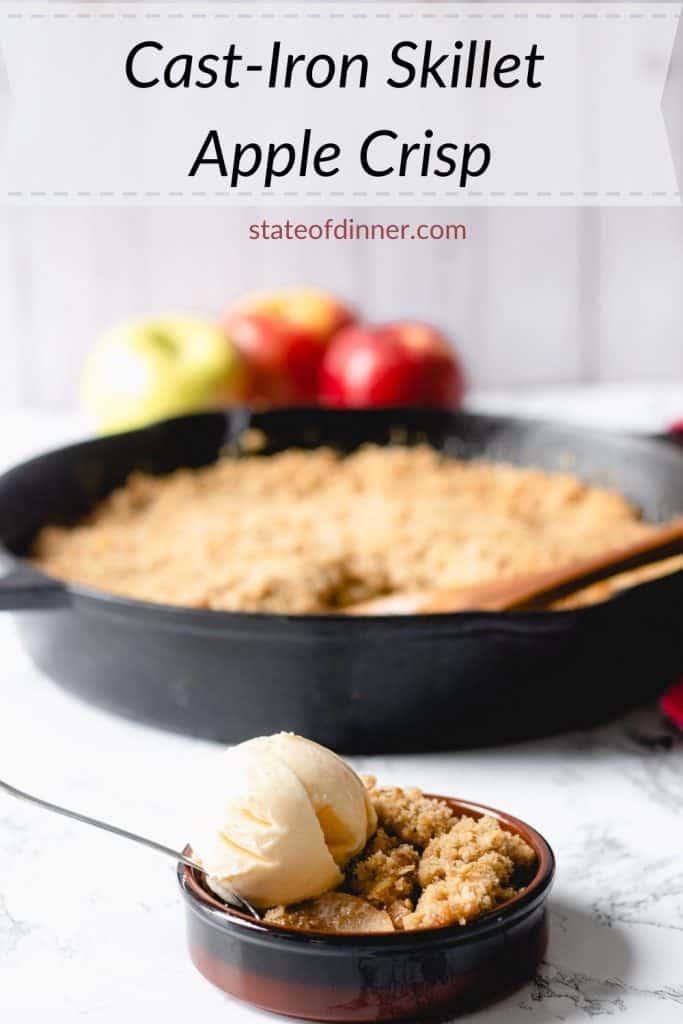 Cast-iron skillet apple crisp is the perfect fall dessert! Apples are briefly caramelized on the stovetop and then topped with a brown sugar-cinnamon and oat topping. It is so easy to make that you will find yourself wanting it again and again!

I met my husband Matt while he was a manager of a Chili's restaurant. He lived in Tulsa, and I lived in Oklahoma City, but I regularly traveled to Tulsa for work. Unbeknownst to me, he had a tradition where he would randomly make apple crisp as a reward for his staff. Apple crisp wasn't on the Chili's menu, but he made it using their staple ingredients. One night, I was eating dinner at his restaurant while he was working, and he surprised me with an individual apple crisp for dessert. It was so good! From that moment on, apple crisp has kind of become a "thing" for us. It uses ingredients that I always have on hand, so we often make it when one of us gets a craving for a comforting dessert.

Why Make Apple Crisp in a Skillet?

The first time I made apple crisp in a cast-iron skillet I knew I had just up-leveled in the apple crisp making game! This method caramelizes the apples, giving them a depth of flavor without changing the sweetness. And the way that cast-iron retains heat helps the topping to get perfectly crispy, just like apple crisp should be.

What are the best apples for making apple crisp?

For the perfect apple crisp, use a combination of apples. This adds amazing dimension to the flavor of your crisp! During honeycrisp apple season, a mix of honeycrisp apples and Granny Smith apples are my preferred go-to. But pick any combination that suits you!

Some apples that are great for baking include:

Can I make apple crisp without oats?

If you do not have oats on hand, or for some other reason you do not wish to use oats in your apple crisp, you can certainly make this recipe without them! Simply increase the flour to 1 ⅓ cups, and follow the rest of the recipe as normal.

It is important to note that standard old-fashioned oats work best for this recipe! While you could use quick oats, your crisp will have a mushier texture. Avoid steel cut oats, as they are too firm and do not work well for apple crisp.

Step Five: Bake in the Oven

Why is my apple crisp mushy?

There are a few factors that could result in a mushy apple crisp. The first is your apple selection. The apples listed above hold up well, but apples like Macintosh and Golden Delicious will turn mushy, so avoid using those.

The next factor is your butter. The butter in your crisp topping should be cold. Melted butter will create a softer topping that may not crisp up.

Can I add nuts to my apple crisp?

Nuts can be a delicious addition to apple crisp. Stir 1 cup of chopped walnuts or pecans into the oat mixture before sprinkling over the apples.

Should you peel the apples for skillet apple crisp?

This is a matter of personal preference. The peel does break down some during cooking, but I still find the texture too chewy for my preference. Because of this I always peel my apples. But if you like that texture then it is just fine to skip the peeling step.

Can I make this recipe in a regular baking dish?

If you do not have a cast iron skillet, this can be cooked in any oven-proof skillet. You could also bake it in a large baking dish. If you are cooking in a baking dish, toss the apples in a large bowl with melted butter and the remaining filling ingredients.

How do you store apple crisp?

Can you reheat apple crisp?

Try One of These Other Delicious Fall Desserts