Illinois is a land of prairies and rolling hills and is also home to Chicago, one of the largest cities in the nation. The state was once a territory belonging to France, who then lost it to Britain in the French and Indian war. Finally, in 1783 Illinois joined the United States through the ending of the Revolutionary War. Food culture in Illinois is largely aligned with midwestern traditions, with some of the most famous food from Illinois hailing from the great city of Chicago.

Chicago-style deep-dish pizza is really more like a savory pie than a typical flat pizza. It has a flaky crust with high sides lining a pan, tons of cheese, and a robust sauce. This pizza was invented at Uno Pizzeria in the 1940s. Many say that Uno Pizzeria's founder, Ike Sewell, created the Chicago Deep Dish. But Rudy Malnati, who was an employee at Uno's, says the invention was his. Rudy co-managed Uno Pizzeria wit his son Lou. After Rudy's death, Lou went on to open his own restaurant. Many say that Lou Malnati's now has the very best Chicago-style deep dish pizza around.

Pizza is so iconic in Chicago that there are even pizza tours that you can take. On these tours you travel around the city, tasting some of the most notable and delicious pizzas that are available!

I love the story behind Garrett popcorn company. The Garrett family had a competition to see who could make the best popcorn. It was through these competitions that they developed some family recipes and opened their first popcorn shop in 1949. Several years later their customers began requesting something both sweet and savory. They would purchase a bag of the cheddar popcorn, a bag of the caramel popcorn, and then request an extra bag where they could mix them together. It became so popular that Garrett's combined the two so that customers could purchase them already mixed together. This flavor combination has spread across the states and can now be found in most popcorn stores. Though Garrett's recipe is arguably the best.

The first known cookbook to mentioned the modern-style brownie is the Home Cookery Cookbook, published in 1904. But eleven years earlier, upon the request of Bertha Palmer, a pastry chef created what is believed to be the first brownie. Bertha was a socialite, and wife of the Palmer House hotelier, Potter Palmer. One day she was to host a luncheon for women who were gathering for the Columbian Exposition's World Fair. She wanted a dessert that was like cake, but smaller. Something that could be packed in boxed lunches. The chef created a brownie topped with walnuts and an apricot glaze. This dessert can still be enjoyed at The Palmer House today!

Cora really loved the brownie batter! For our dinner of famous food from Illinois, we made our Ultimate Gooey Chocolate Brownie recipe and added an apricot glaze to convert them to something similar to a Palmer House brownie. For this glaze, simply boil equal parts of apricot preserves and water on the stove for a few minutes. Let it cool and drizzle it over the top of your brownies. 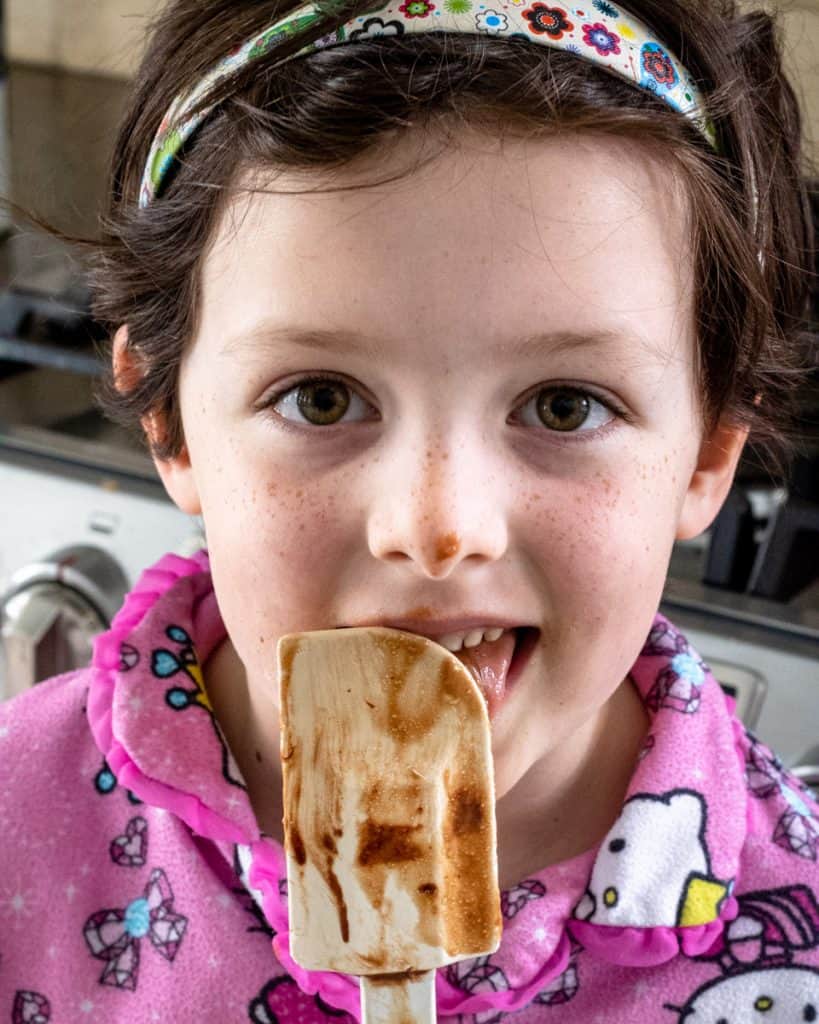 We have a lot of fun coloring these pages for each week's state dinner. This week we enjoyed some Chicago-style mixed popcorn while we colored. I love that these coloring pages have fun facts about each state! It makes learning enjoyable.