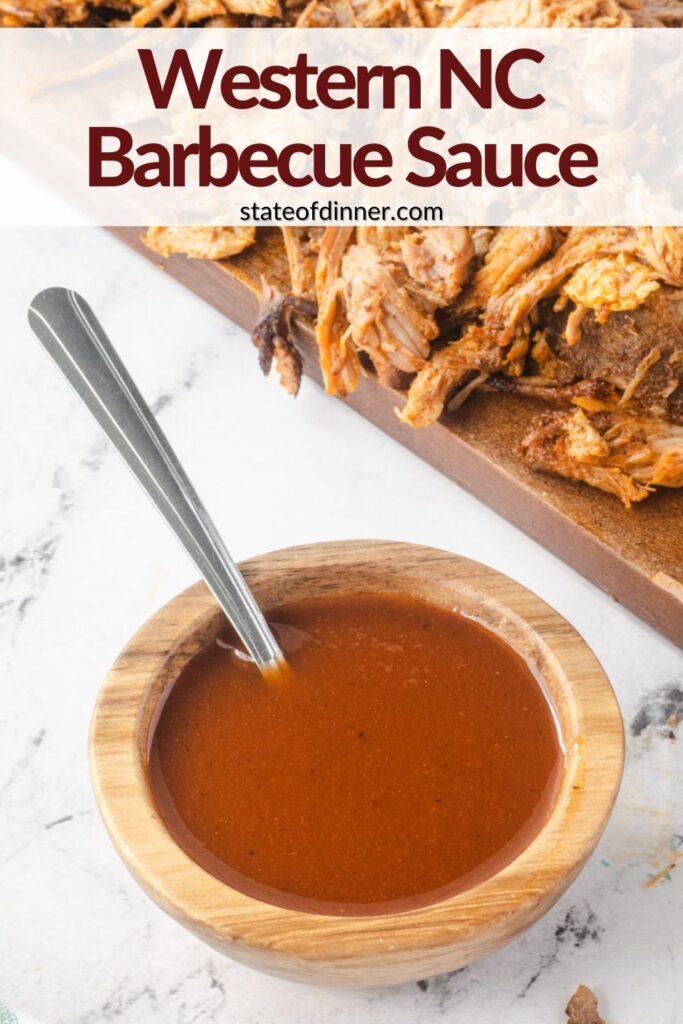 Western North Carolina BBQ Sauce is a vinegar-based tangy sauce that is balanced with the sweetness of ketchup. It is easy to make your own sauce, with only 1 recipe step, and less than 20 minutes of cooking time!

What is North Carolina Barbecue?

Eastern Carolina BBQ Sauce: In Eastern North Carolina, where they believe you should barbecue the whole hog, they keep the barbecue sauce very simple. Eastern sauce is made of vinegar, brown sugar, and spices. It is used as a mop sauce to baste the pig while it is cooking, and is also used as a sauce while serving.

Western Carolina BBQ Sauce: This is one sauce with many names. You may hear it called Piedmont sauce or Lexington-style. Some even refer to it as Carolina Red! This sauce adds ketchup to the mix. It still features the tangy vinegar base and the sweet and spicy complexity of an Eastern-style sauce. But the ketchup adds body and a little extra sweetness. It is most often used as a finishing sauce, as well as being served alongside the pork.

On the western side of the state, they typically cook the pork shoulder, instead of the whole pig. While pit masters pride themselves on the hours spent outside over a hot grill, my favorite way to cook pork shoulder is following this sous vide pork recipe! It gives you the most tender and juicy pork every time!

Carolina Gold: This style of barbecue sauce often gets mistakenly associated with North Carolina barbecue, but it has its roots in South Carolina. Carolina Gold adds yellow mustard instead of ketchup and often replaces the brown sugar with molasses.

Apple Cider Vinegar - This vinegar is the heart of North Carolina barbecue sauce. It is tangy, with a little bit of sweetness from the apples.

Ketchup - You can leave this ingredient out if you want an Eastern-style barbecue sauce, but is a key ingredient for this recipe. If you do not have ketchup on hand, you can use 6 ounces of tomato paste, and add ¼ teaspoon of garlic and ¼ teaspoon of paprika.

Brown Sugar - Either light or dark brown sugar can be used in this recipe. Dark brown sugar will give you more of a molasses flavor, which can be preferable in a barbecue sauce.

Hot Sauce - Hot sauce is another highly controversial topic to North Carolinians! While some use Tabasco or Louisiana hot sauce, many folks claim that Texas Pete's is the only hot sauce worth using!

It could not be more simple to make your own vinegar barbecue sauce!

Simply whisk all of the ingredients together in a saucepan, and simmer for 15-20 minutes.

Allow the sauce to cool to room temperature, then pour into an airtight container and refrigerate.

For a true North Carolina meal, enjoy this sauce with some pulled pork, coleslaw, and a side of hush puppies! And no southern meal would be complete without a slice of creamy sweet potato pie!

Make your own Lexington-style coleslaw, known as red slaw, by adding 1 cup of this Western NC BBQ sauce to a head of shredded cabbage. Toss the sauce into the cabbage and let chill for 20 minutes before serving.

How do I store Western North Carolina vinegar barbeque sauce?

Barbeque sauce should be refrigerated in an airtight container. It will keep for up to 2 months.

How do I adjust the heat of the sauce?

If you are very sensitive to spice, start by cutting the hot sauce proportion in half, using only 1 ½ teaspoons. You can always add more later! If you want more spice, add ½ teaspoon of crushed red pepper flakes, or ⅛ teaspoon cayenne pepper to the sauce before simmering.

Is this BBQ sauce sweet?

The primary flavor of this sauce is tanginess from the vinegar. It does have a subtle sweetness. If you prefer a sweeter sauce then you can increase the brown sugar to up to a half-cup. 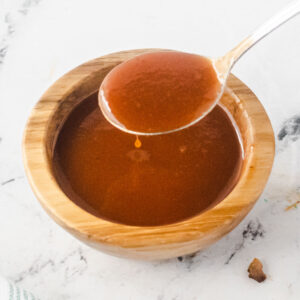 For an even spicier sauce, add ½ teaspoon crushed red pepper, or ⅛ teaspoon cayenne pepper. For a sweeter sauce, increase the brown sugar to up to ½ cup.