If this is your first time on our site, start your journey here: Exploring the States

Our Alaska dinner was a much-welcomed change from the heavy and fried Alabama dinner we had last week! It was lovely to enjoy a fresh, colorful, and nutrient-rich meal! 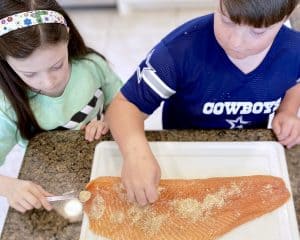 Since the state fish in Alaska is the king salmon, of course, we had to have salmon for dinner! We decided to try our hand at hot smoked salmon, something I do not believe I have ever had! Matt is in charge of the smoker in our family, so he is responsible for a good portion of this delicious meal! Cora and Levi did help brine the fish before it started smoking. We did a simple dry brine of brown sugar and salt (2-to-1) ratio. Because of the brown sugar, coating the fish was almost like playing in sand. Well, except for the slimy fish part. After brining for 2 hours we smoked it at 225 degrees over applewood chips, for about an hour. It was delicious! 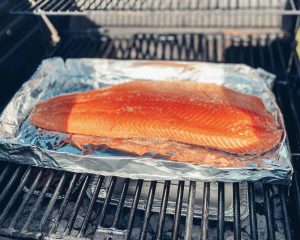 For the vegetables, we had Brussels sprouts, just because it’s a vegetable they grow there, and we also had a raw root salad. Salads similar to this showed up several times when I was researching Alaskan foods. It is a very colorful combination of beets, radishes, and carrots with a lemon-thyme dressing. The fun part was slicing these super-thin with a microplane. I was nervous the whole time, as I know so many people who have shaved the tip of their finger off with this tool, but Cora and Levi did great at carefully slicing the vegetables. The eating of the salad was not so fun. It added great color to the table but wasn’t a very flavorful salad. 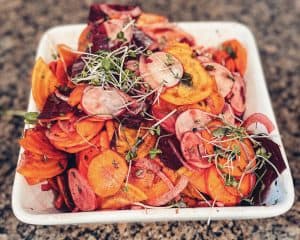 We rounded out the meal with a variety of berries and some sourdough bread. Cora was thrilled about the addition of berries to the meal. She would eat a 100% fruit diet if I let her. She did also enjoy a couple of slices of bread, because who wouldn’t? You may wonder why we chose to have sourdough for Alaska instead of with our California meal. One reason is that it is a better compliment to the other menu items we chose. But it’s also for the sake of the story. We learned that sourdough originated in ancient Egypt around 1500 BC, and it became common in the United States during the Gold Rush when miners relied on the durability of sourdough, which made this a staple food. When Klondike prospectors sailed from San Francisco to Alaska they carried the sourdough with them, hence designating San Francisco as the home of sourdough. In Alaska, the miners would wear the sourdough strapped to their body as a way to keep it warm and protected from the elements. “Sour dough” is now a nickname in Alaska for those who have spent an entire winter in the Arctic Circle, as they too have survived the cold. 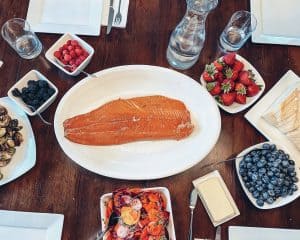 Those “Sour doughs” are probably cringing over our selection for dessert. I know, I know, Baked Alaska doesn’t actually come from Alaska. But it is so darned tasty! And fun to make! So yes, we had a spongy vanilla cake, topped with a domed layer of creamy ice cream, smothered with fluffy meringue, and we enjoyed every bite! Click here for the recipe! 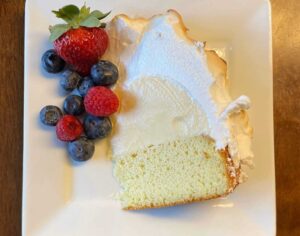 My parents went on an Alaskan cruise for their 50th anniversary, so we invited them over to enjoy dinner with us. This was our first indoor gathering with them since our stay at home order began two months ago. The milestone made our dinner extra special! My mom shared with us a photo book she had made of their trip and told us about the ice glaciers and wildlife they encountered. My dad shared how Alaskan use totem poles to tell stories, and told us the legend of how mosquitoes came to be. This story captivated both Levi and Cora! At bedtime that night, Cora prayed, thanking God that she got to hear great stories. And I smiled with the joy that they are gaining more than just cooking skills and knowledge. They are building some really great memories!