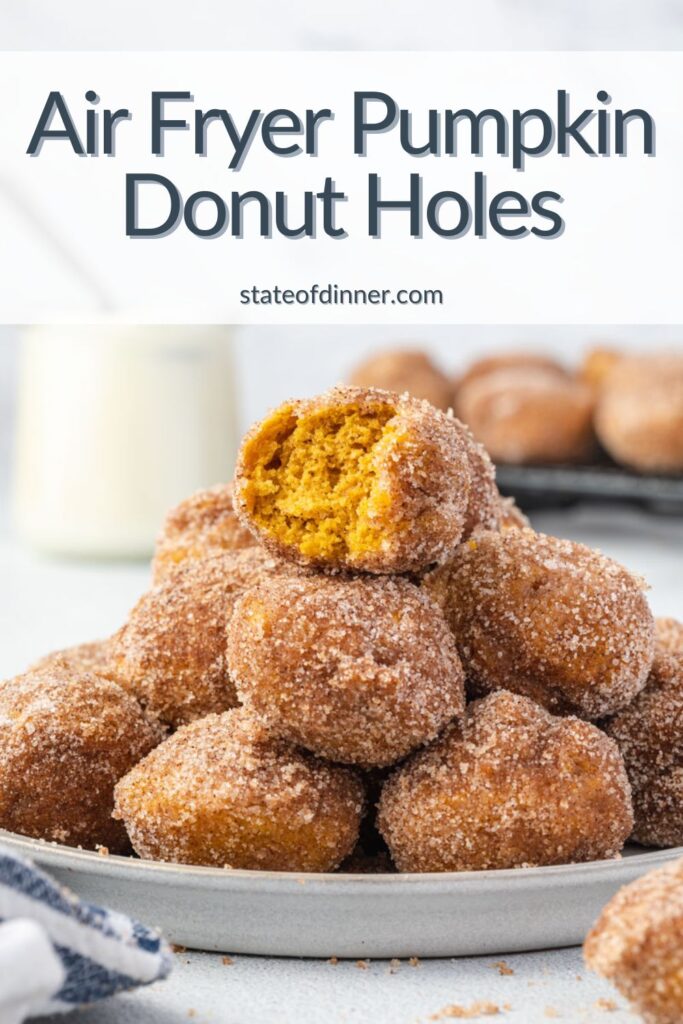 These tasty Pumpkin Donut Holes are packed with real pumpkin and warm spices, baked up in the air fryer, and rolled in cinnamon sugar. They are a perfect fall treat for breakfast or dessert!

Why You Will Love This Recipe

Warm Fall Flavors - Pumpkin recipes are one of my favorite things about the fall season! The warm cinnamon and nutmeg spices are so comforting!

Easy to Prepare - You don't even need an electric mixer! Just whisk the ingredients together, put them in a pan, and bake them up in your air fryer! They cook pretty quickly so it's as easy as making pancakes or waffles!

Great for Breakfast or Dessert - These air fryer donut holes will get your kids out of bed happily in the morning! Balance the sweetness with a simple hash brown casserole. And with a cream cheese dipping sauce, they also make a decadent dessert!

Here are a few more recipes to enjoy during pumpkin season!

See the recipe card at the bottom of this post for the full list of ingredients, including measurements.

Pumpkin Puree: Be sure to get 100% pure pumpkin puree, not pumpkin pie filling (which has added sweetener and seasonings).

Spices: 2 teaspoons of pumpkin pie spice can be used instead of the individual spices that are listed. If you like a little extra peppery taste in your pumpkin desserts then add ¼ teaspoon of allspice or ⅛ teaspoon of black pepper.

Egg: The egg helps with texture, making the donut holes soft and tender!

Buttermilk: Buttermilk adds moisture and flavor. If you do not have buttermilk then add 1 tablespoon of white vinegar to a measuring cup and then fill it with enough regular milk to equal 1 cup.

1) Whisk the dry ingredients in a medium bowl.

2) In a separate large mixing bowl, whisk the melted butter with the brown sugar, egg, and vanilla extract.

3) Add the pumpkin puree and the buttermilk.

4) Add the flour mixture to the wet ingredients.

5) Portion the batter into the donut hole pan.

These donut holes are best enjoyed on the day that they are prepared. If you do have leftovers, store them in an airtight container, with a paper towel, for up to 2 days.

Yes, pumpkin donut holes freeze wonderfully! Freeze them without the butter and cinnamon sugar coating by placing them in a single layer on a tray that is lined with parchment paper. Freeze them for 2 hours, then remove them to a freezer bag or freezer-safe container. Place them back in the freezer for up to 3 months. Thaw on the counter overnight, then coat with butter and cinnamon sugar before serving.

Can I bake donut holes in the oven?

Yes, donut holes can be baked in the oven. Spray a mini muffin pan or donut hole pan with nonstick baking spray. Then bake at 350°F for 10-12 minutes.

What air fryer did you use for this recipe?

I used the Cosori 5-Qt Air Fryer. Some air fryers cook differently, so the bake time may be slightly different for your fryer. 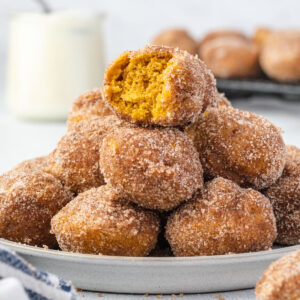 Yield: About 45 donut holes (nutritional information calculated at 3 donut holes per serving) It is best to enjoy these donut holes on the same day that they are coated in cinnamon sugar. The butter and sugar will turn them soggy. Store uncoated donut holes in an airtight container at room temperature for up to 5 days. Dip in butter and roll in cinnamon sugar before eating. Optional: Serve with Cream Cheese Dipping Sauce for an extra delicious treat!