Creamy Boston Clam Chowder is loaded with tender potatoes and clams, and topped with crispy bacon. It is a comforting bowl of soup for any time of year!

Boston clam chowder and New England clam chowder are one and the same. Chowder with a creamy base, potatoes, and plenty of clams and seasonings. There is also Manhattan Clam Chowder, which has a red tomato-based broth. But when I am looking for a bowl of comforting soup, creamy wins me over!

Clam chowder has deep roots in American history. The Boston version has been served at Ye Olde Union Oyster House, American's longest continuously operating restaurant, since 1826. You can read more about the history of this tasty soup in this post detailing our Massachusetts state dinner.

If you like creamy, comforting soups, you should also try Knoephla Soup, which is a flavorful German potato and dumpling soup.

Step Four: Add Flour and Half and Half

What to Serve with Clam Chowder

You can serve clam chowder as the soup course for a meal, or as the main dish itself. Many say that in order to be a true Boston Clam Chowder it has to be served with oyster crackers. It is also delicious with these complementary foods:

If you are serving wine, full-bodied white wine like a California Chardonnay pairs well.

What if I want my clam chowder to be thicker or thinner?

This recipe makes a pretty thick clam chowder. However, if you find your chowder is too thin for your preference, it is an easy remedy! Just remove about ¼ cup of the soup liquid and place in a small bowl. Add a tablespoon or two of flour to the liquid and stir until fully combined. Simmer for a few minutes to allow the flour to thicken the soup.

For a thinner soup, it is even easier! Just add some additional chicken broth or cream, and stir until it is your desired consistency.

How should I safely store clam chowder?

Your chowder should be refrigerated within 2 hours of making. This will keep the seafood and the dairy from spoiling. Store in an airtight container and it will keep for 3-4 days.

Can clam chowder be reheated?

Clam chowder is best eaten right away. Freshly made chowder has tender clams and they can get rubbery when reheated. If you are okay with this texture change then reheating is fine.
Simply heat on the stove over medium heat, stirring frequently. Do not let the soup come to a full boil. Just cook until it is heated through.

Can it be frozen?

Clam chowder can be frozen for up to 6 months. Freezing the chowder can result in the soup turning grainy once it is reheated. To minimize this, stir the soup frequently and do not let it boil.

Check out these other Massachusetts recipes!

If you like this recipe, please share it with your friends! And once you taste it, let me know your thoughts by providing a review. 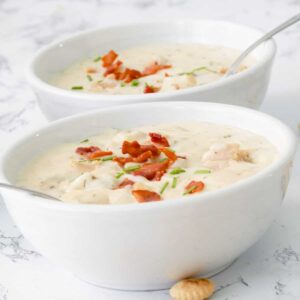 The nutritional facts provided are only estimates. The accuracy of the nutritional information for any recipe on this site is not guaranteed.