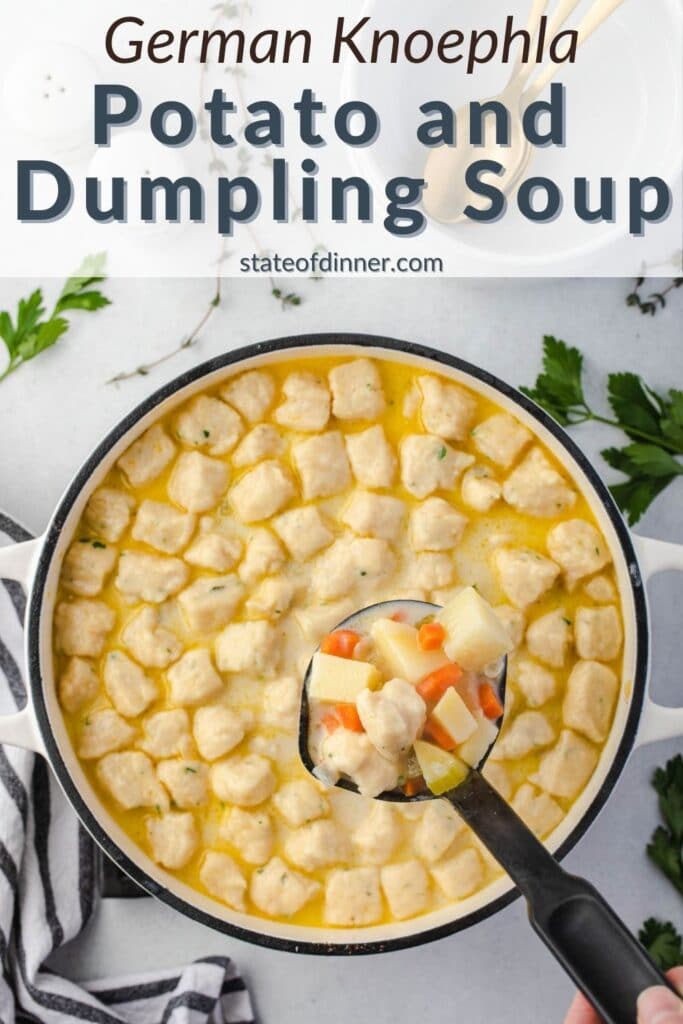 This Creamy Knoephla Soup has herbs added to the soft dumplings, which makes it so flavorful and delicious! This recipe is a twist on the classic German potato and dumpling soup recipe. It is easy to make and so incredibly tasty!

This famous North Dakota dish is a hearty soup that consists of potatoes and soft dumplings floating in chicken broth and often includes celery, carrots, and onions. The tradition of making knoephla came to America with Germans who immigrated and settled in North and South Dakota. Back then, knoephla was famous because it could be made quickly with ingredients that were readily available to them.

You may see this soup spelled knöephla, knöpfla, knefla, and even nefla. They are all German variations of a word that means "little button" which refers to the soft dumplings that are in the soup.

Why You Will Love This Recipe

Comforting: This soup is so comforting and perfect for a chilly day. It will warm you right up!

Easy: This recipe is easy to make and doesn't require any special equipment. Knead the dough by hand or using the dough hook of your electric mixer.

Flavorful: The herbs added to the dumplings make this soup extra special! They are soft little pillows of flavor!

Potatoes: Yukon Gold is a wonderful potato for knoephla soup because it is buttery in flavor and holds up well. You can also use Russet or red potatoes.

Chicken Broth: Use low-sodium chicken broth so that you have better control over the sodium content in your soup. Boxed broth or homemade both work well.

Bacon: I like to use bacon in this soup to add flavor and richness. It is also a nice texture sprinkled over the top of the soup. You can leave out the bacon and an additional 3 tablespoons of butter if desired.

Heavy Cream: Heavy cream adds richness and body to the soup. For a dairy-free soup, leave out the cream.

Herbs: Fresh parsley, dill, and thyme are classic knoephla soup herbs, but you can experiment with other fragrant herbs. Oregano makes a great substitution!

If you are using bacon then cook it in a Dutch oven or large pot over medium heat. I find it easiest to chop the bacon prior to cooking, but you can also cook the strips and then crumble the bacon after it has cooked.

If you are not using bacon then skip this step and simply melt butter in the pan.

The next step is to create our base of flavor by sauteeing the onions, carrots, and celery in the bacon grease and butter. If you are fancy then you call this step "mirepoix."

Flour is added to thicken the soup and continue building flavor. Stir the flour continuously so that it doesn't burn.

Add the chicken broth, diced potatoes, and bay leaves. Once the liquid is boiling you can turn it to low heat and allow the soup to simmer until the potatoes are soft.

Check the potatoes after 20 minutes. If you cook the potatoes for too long they will fall apart and the goal is to keep the cubes intact.

It may look intimidating, but homemade dumplings are really simple to make! Mix the herbs, flour, salt, and baking powder in a large bowl.

In a measuring cup, whisk the egg and milk together.

Make a well in the center of the flour mixture and add the milk mixture. Fold until the liquid is mixed in and you are left with shaggy dough.

Sprinkle flour onto a clean work surface and sprinkle with flour. Knead the dough for 5 minutes. You can also use an electric mixer for this step, if you find that easier. This is not a stiff dough. It should feel soft but not sticky.

Sprinkle the top of the knoephla dough with more flour and use a rolling pin to roll it into a ½-thick rectangle. Cut the dough into ½-to-1-inch squares. They will expand some as they cook. I like to use a pizza cutter for this step but a sharp knife works as well.

If you'd rather, you can roll the dough into a log that is 1-inch in diameter, and cut your pieces from there, but I think cutting from a rectangle is easier.

Once the potatoes are soft, drop the knoephla dumplings into the soup one at a time. They will bounce up to the surface of the soup when they are cooked through so you may need to stir the soup to open up new areas where you can drop the dough.

It wouldn't be creamy soup without the cream! After adding the cream it just needs to be cooked for a few additional minutes to bring everything up to serving temperature.

Don't forget to top your potato and dumpling soup with some crispy bacon bits for a delightful texture!

Knoephla soup is a hearty meal on its own. Just serve it with a slice of freshly baked bread or dinner rolls. For a more filling meal, enjoy this soup with a side salad.

How do I store leftover knoephla soup?

Leftovers can be stored in the refrigerator for up to 3 days. Reheat the soup over medium heat on the stove, or microwave until your desired temperature is reached.

Can knoephla soup be frozen?

Because of the cream in this soup, it is best to enjoy it immediately or within a couple of days of preparing. The cream will separate when it is frozen. It is still safe to eat, but will not be the same quality after freezing.

Can knoephla soup be made in advance?

Like most soups, the flavors develop over time, so it can be made ahead and is delicious when served the next day.

Can I make knoephla soup with vegetable broth?

What is the difference between knoephla soup and potato dumpling soup?

For more soup recipes, check out this collection of comforting soups for winter. 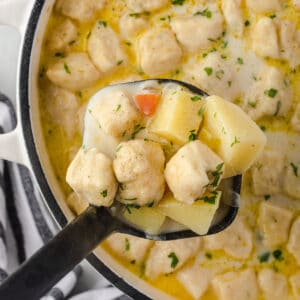 Recipe by: Erin
Creamy Knoephla Soup has herbs added to the soft dumplings, which makes it so flavorful and delicious! This recipe is a twist on the classic German potato and dumpling soup recipe. It is easy to make and so incredibly tasty!
5 from 4 votes
Print Recipe Pin Recipe
Prep Time 15 mins
Cook Time 40 mins
Total Time 55 mins
Course Soup
Cuisine German
Servings 8
Calories 605 kcal

Storage:
Store refrigerated in an airtight container for up to 3 days. Reheat in the microwave or over medium heat on the stove. Vegetarian:
To make this soup vegetarian, leave out the bacon and replace it with additional butter.  Vegetable broth can be used in place of chicken broth.