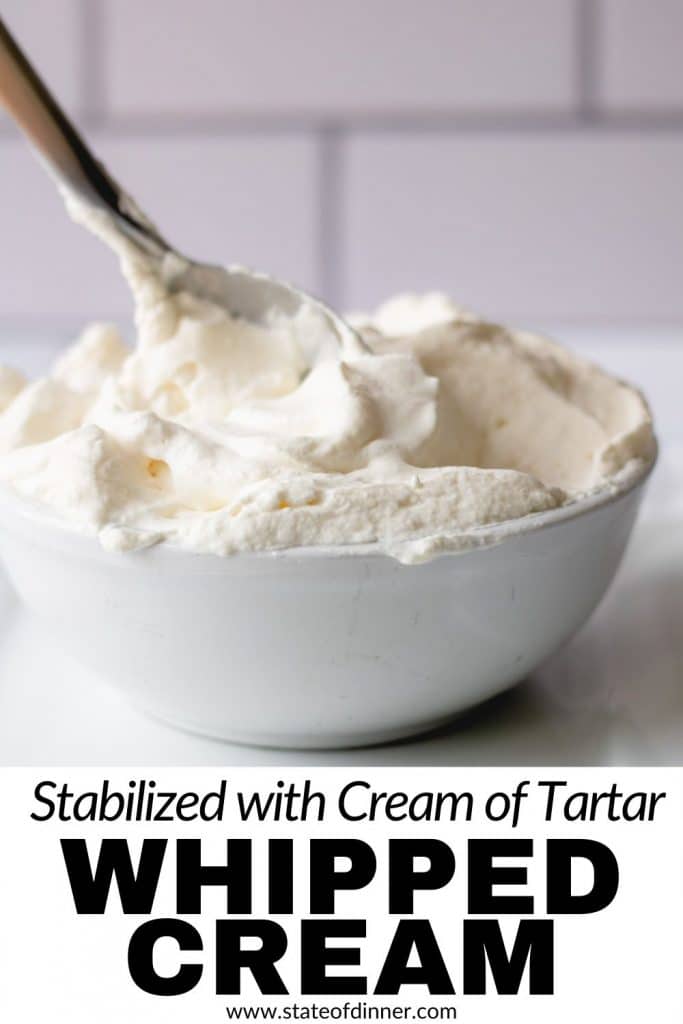 Learn how to stabilize whipped cream with cream of tartar! One simple ingredient transforms fluffy, delicious whipped cream into something that will last for days.

Whipped cream is the perfect topping for so many dishes! From ice cream to pancakes, this fluffy, creamy topping can really make a dish special. My family likes to joke that pie is merely a serving vessel for the true star, whipped cream.

I love to make my whipped cream from scratch instead of buying whipped topping from the store. The flavor is so much better as it is just cream, sugar, and vanilla without any extra chemicals.

There is only one problem with homemade whipped cream: It isn't as stable as store-bought. Over time the liquid separates from the cream. This process is called weeping, and it can result in a messy, soggy dessert.

Thankfully, it is an easy fix! By adding just one simple ingredient, the whipped cream can be stabilized where it holds up just as well as store-bought. This ingredient doesn't change the flavor at all! It is delicious and now we have whipped cream that we can use for a variety of things.

Sugar - It seems everyone has their favorite sweetener that they like to use for whipped cream. Powdered sugar does help with stabilization, but I prefer the taste of granulated sugar. Use whichever you prefer. It is an equal substitution.

Cream of Tartar - This is the magic ingredient that stabilizes the whipped cream. Cream of tartar keeps the protein molecules in the cream in place, which provides structure to the water and air bubbles in the whipped cream, holding them together instead of allowing the water to seep out.

Other Ways to Stabilize Whipped Cream

If you do not have cream of tartar on hand then try one of these other ways to stabilize whipped cream:

Tip for the Fluffiest Whipped Cream

Heavy cream should be very cold in order to produce the fluffiest whipped cream. To understand why we will take another trip to science class. When cream is cold the fat molecules are solid. The solid fat stays in place while the air is introduced to the cream, allowing the cream to expand.

Pro Tip: In addition to keeping your heavy cream in the refrigerator until you are ready to whip it, you can also freeze your bowl and beaters for 20 minutes, which will help your cream stay cold as it is whipped.

Ways to Use Whipped Cream

Can you freeze whipped cream?

Whipped cream should go into the freezer in the shape you want to serve it, as it will not spread or pipe once frozen. Use a piping bag to create dollops of whipped cream that can be frozen and later placed on top of desserts. They will last in the freezer for up to 2 months.

Can I add food coloring to stabilized whipped cream?

If you would like colored whipped cream, add 2-3 drops of food coloring at the same time as you add your vanilla. Gel coloring can also be used. The whipped cream will be pale in color. Adding too much food coloring would thin the cream and make it runny.

Can you re-whip deflated whipped cream?

Yes, if you find your whipped cream has lost its fullness then just put it back in a large mixing bowl and beat with an electric mixer on high speed. In just a minute or two it will return to its nice, fluffy state. 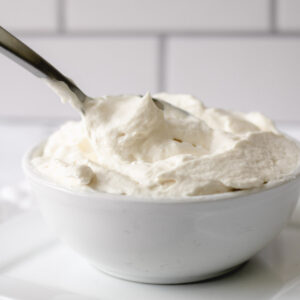 Yield: About 4 cups of whipped cream Use cold cream and a chilled bowl for best results.