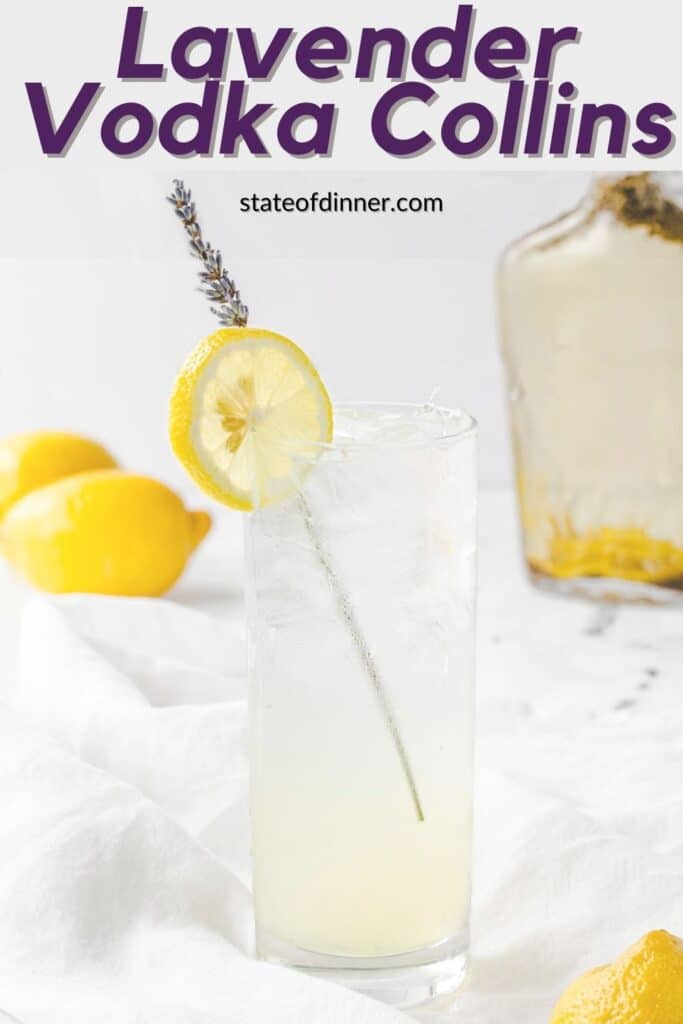 Sipping on a lavender vodka cocktail may be the ultimate in relaxation. Learn how to make a simple lemon and lavender vodka infusion that can be used to make a variety of drinks. I'll even show you how to use the infusion to make my favorite, a Lavender Vodka Collins!

There are many benefits of lavender but one of my favorites is that there has been great research showing that lavender aids in relaxation and helps in the reduction of stress.

That makes it the perfect addition to cocktails, in my mind! Enjoying a tasty beverage at the end of a long day is made even better when it includes an ingredient that will help me to relax even more!

How to Make the Infusion

It is so simple to make lavender-infused vodka! It just takes three simple ingredients:

Get a big bottle or mason jar and add the dried lavender and the lemon peel to the bottom. Fill it up with vodka and seal tightly.

It is best to store your infusion in a cool, dark, and dry place, like a cabinet or pantry. The vodka will be infused with the flavor of the lavender, with a subtle undertone of citrus.

How long to let it infuse is a matter of personal preference. Give it a taste after 3 days. (The taste-testing is my favorite part!) If it is to your liking then it is ready to strain. If you want more flavor, leave it until it tastes just how you want it.

To strain, get a second jar and put a strainer or cheesecloth over the top. Slowly pour the vodka through the strainer into the other jar, allowing the lavender buds to stay behind.

The Lavender Vodka Collins is a refreshing lemon lavender cocktail that is so simple to make!

Can I use a liquor other than vodka?

Vodka is the best liquor to use because it is clean and allows you to really taste the lavender. Gin can also be used, though the botanical flavors of the gin will also come through.

Can a lavender vodka collins be made in large batches?

For large batches, multiply the proportions by the number of people you will be serving, and mix the vodka, simple syrup, and lemon juice into a pitcher. When ready to serve, pour over ice and top with club soda.

How long does the vodka keep?

If stored properly, in a dark and cool location, lavender vodka can keep indefinitely. Store it in a tightly sealed container that is just big enough to hold the liquid. You want as little air as possible stored in the container.

Can I make a smaller batch of the lavender vodka infusion?

This recipe makes 2 cups of lavender vodka, but you can make a smaller batch if you prefer. Just scale down according to the amount that you desire. 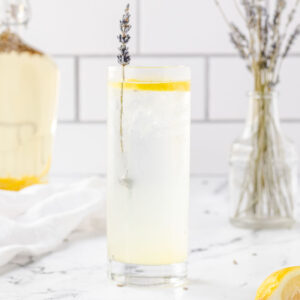 How to strain: Place a strainer or cheese cloth over a wide mouthed jar or bottle. Carefully pour the infused vodka into the strainer. Discard the lavender and lemon and store the infused vodka in an airtight container.   For large batches, place all of the ingredients except for the club soda into a pitcher. When serving, portion into individual glasses filled with ice and top with club soda.